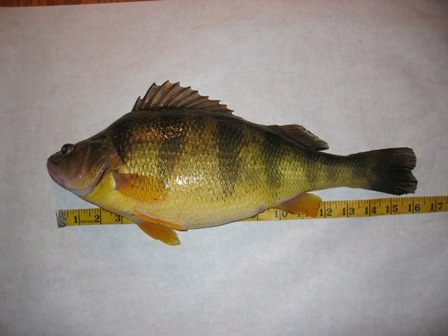 Yellow perch, Perca flavenscens, is a sportfish found throughout the Great Lakes region and highly valued for its high-quality, firm, white, flaky flesh (Hinshaw 2006). A commercial fishery established for yellow perch yielded as high as 37 million pounds through the 1950s and ’60s but nearly collapsed shortly thereafter (Scott and Crossman 1973). In response, commercial yellow perch harvest became prohibited except for Lake Erie and Green Bay of Lake Michigan. In 2008, the estimated commercial yellow perch harvest from the Great Lakes was 8.33 million pounds. Despite the major decline in commercial harvests, demand for yellow perch as a food fish has remained high for over 30 years (Riepe 1998). As early as the 1970s, researchers at the University of Wisconsin-Madison became interested in culturing/farming the species (Hart et al. 2006). Initial research showed that yellow perch had characteristics that made them a favorable candidate species for commercial aquaculture:

There are challenges associated with the culture of yellow perch. Limited knowledge of nutritional requirements has been an issue common in many culture species. A commercially available specialized diet has not been developed for yellow perch, and they are typically fed diets developed for rainbow trout (Hinshaw 2006). Furthermore, yellow perch become sexually mature before they reach market size. Small perch spend energy on development of reproductive organs and spawning rather than on meat production. Research to develop both sterile fish and all-female production has been conducted (Hart et al. 2006). The final, and possibly most concerning, issue is the limited supply of fingerlings for grow-out. To have a commercially viable industry, you must have a sustainable and steady supply of fingerlings. Consistent procedures for spawning yellow perch have yet to be developed. Additionally, formulated or artificial first feed diets for yellow perch fry have not been developed. In the midwestern United States, where the majority of yellow perch production occurs, pond productivity cycles are variable from year to year even with established pond fertilization techniques. As a result, in outdoor systems, timing of zooplankton blooms, which is critical for fry survival, can be substantially out of synch with the timing of first feeding necessities. Intensive indoor fry production would therefore seem to provide better control. However, indoor first feeding techniques are currently expensive and time consuming and achieve highly variable survival as well. Most commercial yellow perch facilities in the United States currently utilize outdoor production techniques for first feeding and either outdoor or outdoor/indoor combination methods for fingerling feed training.

Mature females begin to spawn in the spring when temperatures reach 6° to 12°C and continue for two to three weeks. In the wild or in culture ponds, females lay a strand of eggs, called ribbons, over a substrate, such as sand, gravel, or vegetation, and then several males will fertilize the eggs. Females deposit between 79 to 233 eggs/g of fish (Hart et al. 2006). In commercial culture settings, there are three methods of spawning yellow perch. 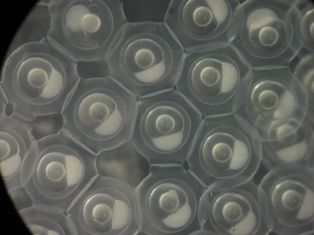 Egg ribbons, whether collected from the wild, strip spawned, or spawned in ponds, hatch in 6 to 51 days depending greatly on the water temperature (Hart et al. 2006). Egg ribbons are delicate, and the percentage of hatch will depend on the quality of the eggs and the amount of handling. Newly hatched larvae will be 4.5 to 7 mm and begin feeding in a few days. They initially feed on small zooplankton such as Daphnia. Zooplankton remain an important part of the diet throughout the life cycle, but as the larvae grow, they begin to feed on larger invertebrates and fish, including other yellow perch (Hart et al. 2006). Fry and fingerling production methods strive to reduce cannibalism to the extent possible. 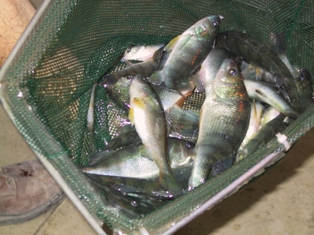 Fingerlings can be grown to market size in a variety of systems including ponds, cages, and recirculating aquaculture systems (RAS). Pond culture, stocking the fingerlings into a pond and feeding them a commercial diet until they reach market size, is the most popular culture method due to lower startup and production costs. Unfortunately, in regional temperate climates where yellow perch production occurs, water temperature variability results in seasonal production cycles for yellow perch (Hart et al. 2006). As a result, time of production from egg to a standard harvest size of one-third pound for food fish is about two years in outdoor ponds throughout the midwestern and north central regions of the United States. Yellow perch have shown to perform well in cages, but grow-out also appears to take two to perhaps three years. Recirculating aquaculture systems permit year-round culture of yellow perch and faster production cycles. However, RAS are expensive to construct and also require higher operational costs, redundant safeguard systems, and a fairly significant amount of training and/or learning time to efficiently operate.

Yellow perch have a physiological optimal temperature range of 22° to 24°C (72° to 75°F; Hart et al. 2006), although yellow perch RAS producers have shown a tendency to maintain water temperatures between 18° to 20°C (64° to 86°F) to reduce potential for disease outbreak. Their upper lethal temperature limit is between 26° to 30°C (79° to 86°F). Additional water quality parameters are provided in Table 1.

The following articles can be downloaded from the North Central Regional Aquaculture Center’s website: