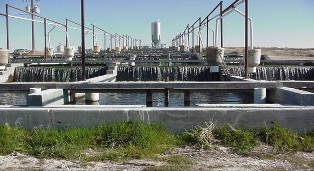 A raceway in its simplest form is just a flume for carrying water. Raceways for fish culture are tanks which are relatively shallow and rely on a high water flow in proportion to their volume in order to sustain aquatic life. Flow-through fish culture systems pass water through the systems once, provide waste treatment as required, and then discharge the water rather than treating and recirculating it. For successful aquaculture, the inflowing water must be within the temperature tolerance of the species being cultured and should match the optimal temperature for the target species as closely as possible. Oxygen is also provided by the incoming water and is removed by the fish as the water progresses down the raceway. In most raceway systems, dissolved oxygen is replenished by allowing the water to fall into subsequent tanks within the raceway. Dissolved metabolites from animals in the system are carried out in the effluent, while settleable particulate wastes can be captured by settling or less frequently by other means of filtration. Depending on the water chemistry, the depletion of oxygen and the accumulation of ammonia, carbon dioxide, or fine particulates can eventually become limiting to fish production within the system. No natural foods are generated in these systems, and nutritionally complete diets are an essential requirement for successful raceway aquaculture.

Flow-through aquaculture systems require water exchange to maintain suitable water quality for fish production and rely on water flow for the collection and removal of metabolic wastes. Water for flow-through facilities is usually diverted from streams, springs, or artesian wells to flow through the farm by gravity. Water pumped from wells or other sources is more expensive and is seldom used. Water diverted from springs or surface sources for flow-through aquaculture is regulated by various public agencies, depending on the specific water laws of each state. Diversion of surface water is considered a non-consumptive use, although pumping groundwater from a well is considered a consumptive use in some states. The discharge of a high-volume, dilute effluent from flow-through aquaculture facilities greatly limits the treatment options available to producers from both technological and economic perspectives.

The typical raceway production system consists of a tank (rearing unit) or a series of rectangular tanks with water flow along the long axis. In an ideal raceway, water flow will approximate plug flow with uniform water velocity across the tank cross section. However, friction losses at the tank-water and air-water boundary layers will cause water velocities to vary across the width and depth of the raceway. Greatest water velocities are at mid-depth, with slightly reduced velocities at the air-water interface and greatly reduced velocities along the raceway bottom. A defining characteristic of linear-pass raceways is a water quality gradient from the inflow to the outflow of the rearing unit during production, with best water quality at the inflow and deteriorating water quality along the length of the raceway as water flows toward the outlet. Circular rearing units are more thoroughly mixed and have relatively uniform environmental conditions throughout the tank.

Compared to ponds, raceways have several advantages. Per unit of space, raceway production is much higher. Raceways also offer a much greater ability to observe the fish. This can make feeding more efficient, and disease problems are easier to detect and at earlier stages. If disease signs are observed, disease treatments in raceways are easier to apply and require fewer chemicals than a similar number of fish in a pond (due to the higher density in the raceway). Raceways also allow closer monitoring of growth and mortality and better inventory estimates than ponds. Management inputs such as size grading are much more practicable in raceways than they are in ponds, and harvesting is also easier.

The disadvantages of raceways are primarily related to their need for large constant flows of consistent, high-quality water. Since such resources are not common, locating and securing a proper water supply is a major consideration. Also, commercial viability often requires that the water gravity flows through a series of raceways before it is released. This adds a requirement for an elevation of the water source and suitable topography for the gravity flow between raceways. Another limitation compared to ponds is the release of effluent. While ponds largely process wastes within the culture systems, raceways, with their low retention times, do not. Effluent releases from raceways are a larger consideration than they are for ponds.