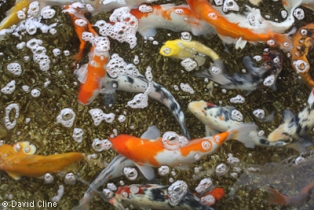 Goldfish (Carassius auratus) were introduced into the United States in the late 1600s and are now widespread across the continent. While the goldfish is non-indigenous, it is not a particularly invasive species and normally does not reach problematic densities in the wild. The goldfish is a good example of a non-native species that has widespread distribution in the wild but rarely achieves high densities. Goldfish are omnivorous and feed on a wide variety of aquatic invertebrates and plant material. They also readily accept commercial diets.

Over 480 million goldfish are sold each year (Census of Aquaculture, NASS 2006). While there are many varieties, the majority of goldfish produced are common “comets,” sold as feeder fish and shipped by truck or air express service to pet stores across the country. Some larger goldfish are also sold as bait or for stocking in backyard water gardens. Pond culture is the most common method for culturing goldfish. Costs are lower and larger volumes can be produced in ponds. While relatively fewer numbers of ornamental varieties of goldfish are produced, they are much higher in value. High-value varieties may be cultured in small covered ponds or flow-through or recirculating systems, typically within greenhouses.

Goldfish can handle poor water quality (low dissolved oxygen, high turbidity), making them ideal for culturing at high densities and shipping for long distances. However, producers are careful to provide good water quality to maintain fish health and growth. Goldfish mature at approximately 1 year of age, but larger females produce more eggs. Two-year-old broodstock are generally used in commercial production and are carefully selected based on characteristics such as health, size, color, and appearance of the fins, depending on whether they are cultured as bait/feeders or as ornamentals. Goldfish can be conditioned to spawn throughout the year but typically spawn in the spring. They are broadcast spawners, with each female releasing a large number of eggs to be fertilized by several males. The females normally spawn on vegetation in the wild. In culture brood ponds, spawning mats of latex-coated coconut fiber are provided as a substrate for the adhesive eggs.

Ornamental goldfish require careful attention in both breeding and culture. These varieties are often artificially spawned using hormone injections, and the fertilized eggs treated to remove the adhesiveness and then incubated in hatchery jars. Eggs will hatch in two to nine days and will begin feeding on Artemia nauplii on the second or third day after hatching. Once large enough, fry can then be transferred to culture ponds and fed artificial diets. Depending on the intended outlet for the fish, goldfish can reach market size in a matter of months.