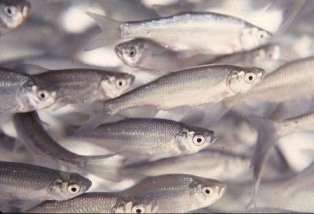 The golden shiner Notemigonus crysoleucas is the most common baitfish sold in the United States. It is also stocked as a supplemental forage fish in sportfish ponds. In 2005, the farm-gate value of golden shiners was $17.1 million, nearly half of the total value for baitfish of $38 million.

A thin, deep-bodied fish with shiny reflective scales and a deeply forked tail, the golden shiner is also relatively hardy and thus is popular both as a culture and a bait species. The typical adult size rarely exceeds six inches, although larger fish have been reported. Juvenile and adult golden shiners feed primarily on zooplankton and aquatic insects, while the newly hatched fry (baby fish) are omnivorous. Golden shiners readily accept commercial fish feeds, and catfish feed is a close match to their dietary requirements. Reproduction begins in the spring when the water temperature reaches 68ºF and continues for several months until the water temperature exceeds 81ºF. A pound of golden shiners may produce over one-half million eggs in a season. Golden shiners are broadcast spawners; they lay adhesive eggs on submersed vegetation, or in culture ponds, on mats of latex-coated coconut fiber. The small eggs (~1-mm diameter) hatch in three to five days, depending on water temperature.

Golden shiner culture methods have changed over time as a result of on-farm innovation and university research. In the past, egg-laden spawning mats would be transferred to nursery ponds for hatching and rearing (mat transfer method). Today, the majority of golden shiners produced come from hatcheries. Mats with eggs are brought into an indoor hatchery and placed into tanks, where water temperature, dissolved oxygen and other environmental parameters can be controlled. Once the eggs hatch, the fry are transported in water within plastic bags that are filled with oxygen. Fry are stocked into nursery ponds, often at rates of one to two million fry per acre, and raised to juvenile size. After four to twelve weeks, the juveniles are transferred to grow-out ponds at lower densities. The higher the stocking density of fry, the sooner they should be transferred to avoid overcrowding in the nursery pond. Fry are fed a finely ground commercial feed (meal) for the first month or so, then the feed form is switched to a crumbled extruded pellet, then to an extruded floating pellet. The feed pellets are too big to fit within the mouth of a golden shiner. Instead, the fish consume the feed by nibbling on the pellets as they soften in the water. A feeding program will at least double production over yields of fish obtained through fertilization alone.

In commercial production, golden shiners are produced in earthen ponds. Pond culture is currently the only economically feasible method for producing this species. Growth of golden shiners in indoor tanks is relatively slow, and if fry are reared indoors, they must be fed an expensive combination of live foods and microparticulate feed.

As golden shiners grow, some of the fish in a pond may be harvested at intervals over time. The remaining fish will grow larger. To produce smaller fish for certain markets, fish are fed at a restricted rate and carefully monitored so that they remain small but healthy. Yields (lb/acre) vary with culture method, harvesting frequency, and feeding rate. In general, yields in excess of 442 lb/acre are desirable in order to cover the total costs of production.

Marketing is the most difficult aspect of baitfish farming. Baitfish are a perishable product, and fish of appropriate sizes and numbers must be supplied to bait shops as needed, to meet angler demand and desires. The weather has an enormous influence on the demand for fish – a stormy weekend will curtail sales. Farmers and distributors must adjust harvesting, marketing, and fish deliveries to meet this highly variable demand for fish. Anyone considering the commercial production of baitfish should be very careful to develop markets for the fish before producing them. For additional information on golden shiner production, see the links on this site, and contact your local Cooperative Extension office.