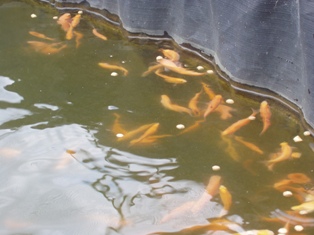 The fathead minnow is a small, thick-bodied fish with a blunt head and small mouth. Normal fathead minnows are dark olive on the upper body, shading to a silver color on the sides and abdomen. The rosy red minnow is light pinkish-orange and is a color variant of the fathead minnow. The rosy red was developed in Arkansas by Billy Bland Fishery. Fathead minnows are native throughout much of North America. Commonly found in ponds and lakes, fathead minnows are omnivores, feeding on detritus, zooplankton, and algae. Fathead minnows readily accept fish feeds, and research has shown that their dietary requirements are similar to those of the channel catfish. Sold both as a baitfish and a feeder fish, fathead minnows are known to be a hardy baitfish, so much so that they are also called “toughies.” According to the 2005 Census of Aquaculture, cultured fathead minnows comprised 26% of total baitfish sales in the United States. The majority of fathead minnows sold as bait still come from wild-harvest or extensive culture in the north-central region of the United States. Concerns over possible transmission of disease and aquatic invasive species through baitfish harvest led to the development by Sea Grant personnel of a hazard analysis critical control point (HACCP) program for baitfish harvesters, designed to reduce these risks.

Fathead minnows are traditionally cultured using the spawning-rearing pond method. Adults are stocked into brood ponds, provided with suitable spawning substrate, and the resulting young are raised with the adults. Reproduction is variable, and ponds may end up with few fish or become overcrowded. Juvenile fish may be transferred to other ponds for growout at lower densities, to provide larger fish for the bait market. Indoor hatchery techniques have been developed for other baitfish such as golden shiners and goldfish, and growers are showing an interest in research on developing similar hatchery techniques for fathead minnows as well.

Spawning in fathead minnows begins when water temperatures reach 18°C and ceases when the temperature rises above 29°C. Males set up territories, and if a female is attracted to a male, she will spawn on a substrate within the male’s nest. Females spawn frequently during the spawning season, every three to four days on average. Interestingly, fathead minnows lay eggs on the undersides or sides of submerged materials. In nature, fathead minnows spawn under sticks and other hard surfaces, as well as under aquatic vegetation such as lily pads. Fathead minnow producers provide substrates such as boards, pallets, tiles, and plastic irrigation tubing.