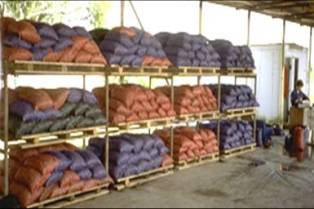 Although the majority of the U.S. crawfish industry is found in Louisiana, these crustaceans are grown in many other states as well, including (but not limited to) Texas, California, Florida, Alabama, Mississippi, the Carolinas, Arkansas, Missouri, and Ohio. Crawfish production typically relies on encouraging natural food sources for the crawfish; direct feeding is not practical from an economic perspective. A large portion of Louisiana’s crawfish aquaculture, in excess of 50 percent, is practiced in conjunction with rice production. Crawfish farming fits well into many existing farm operations by using marginal agricultural lands, crop rotations, and permanent farm labor and equipment during off-peak farming periods. Crawfish can be produced either in permanent rotation with a rice crop year after year in the same location or in a field rotation with rice and occasionally some other crop, with restocking of crawfish each rotational cycle. As the economics of rice production in Louisiana weakened over recent decades, many rice producers turned to crawfish as an accessory crop that can be integrated into their existing farming operations.

Virtually all crawfish culture also relies on natural reproduction rather than stocking hatchery-reared juveniles. The predominant cultured species in North America, the red swamp (Procambarus clarkii) and white river crawfish (P. zonangulus), are classified as “temperate” species; that is, they will tolerate cold winter conditions. Both species, however, possess a number of traits that are usually associated with animals that live in warm waters. These species are short-lived (two years or less), have high juvenile survival, and can alternate between reproductively active and inactive forms. Moreover, P. clarkii is capable of spawning year-round in the southern United States, and some females can reproduce more than once per year.

Unlike some more long-lived northerly species, these crawfishes have life cycles that are well adapted to farm production strategies. Mature animals mate in open water where sperm is stored in a special receptacle, after which the female retreats to a burrow to eventually spawn. Burrowing activity can occur at any time but is most prevalent in late spring/early summer in Louisiana. Although spawning can take place in open water, the burrow provides protection while the fertilized eggs or young are attached to the underside of their mother’s tail. Crawfish of all ages and sizes, whether mature or immature and male or female, will dig or retreat to burrows to survive periods of dewatering. Crawfish ponds are usually drained during the summer months to allow for planting and growth of vegetation, which will eventually serve as the base of the crawfish food web for the following production season.

Prior to draining, some mature crawfish burrow near the waterline. As the water level drops, additional crawfish burrows appear lower on the levee and are sometimes found on the pond bottom; however, the burrows on the pond floor often contain a high percentage of non-reproductive crawfish, such as males and immature juveniles. Because reproduction is somewhat synchronized in pond-reared crawfish, ponds are routinely flooded in autumn to coincide with the main period of reproduction. Once egg laying and hatching occur in the burrows in early fall, it is critical that the female and her young leave the burrow within a reasonable time. When drought conditions force the crawfish to remain in the burrow, increased mortality can occur. Pond flooding or heavy rainfall is usually necessary to encourage female crawfish to emerge from their burrows. Females emerge with their young (or sometimes with eggs) attached to their tails, and advanced hatchlings are quickly separated from their mother as she moves about in the open water. As the vegetation that grew on the dry pond bottom during the summer begins to break down, it fuels the natural food web for the young-of-the-year crawfish, producing a variety of food items such as snails and other aquatic invertebrates.

Crawfish ponds should be located in flat, open areas, and the soils should have sufficient amounts of clay. Clay loams, sandy clay loam, and silty clay loams are satisfactory soil types. A clay soil is necessary to hold water and to maintain the integrity of crawfish burrows. Generally, soils that can be rolled into a ball have enough clay for crawfish culture. Elevations must be sufficiently high to allow the pond bottom to remain above water levels in the surrounding drainage ditches and canals.

Both surface and subsurface water is acceptable for crawfish farming. Wells provide predator-free water, but they have a limited discharge capacity and higher investment and pumping costs. Because well water contains no oxygen and is usually high in soluble iron and toxic hydrogen sulfide, the water must be aerated to add oxygen and remove iron and sulfide prior to entering the pond. Surface water is satisfactory if it is pollution-free and if nuisance predatory fish are screened out. Although cheaper to pump, surface water is usually not as reliable in quantity and quality. A pumping capacity of 75 to 100 gallons per minute per surface acre is ideal for intensive management strategies for crawfish ponds that average 14 to 18 inches deep when fully flooded.

The low-intensity production technology used in farming crawfish requires a harvest method unlike those used to harvest fish. A passive system is used, employing baited traps beginning as early as November and continuing through the following April/June. If fall and winter production of juveniles is low, or where crawfish are grown in more northerly regions, initiation of harvest seldom begins before March and is often extended into late July. Trapping is labor intensive, and over half of all production expenses are associated with harvest. Bait and labor are typically the major harvesting costs. Efficient harvesting is essential for crawfish farming profitability.

Crawfish farming is considered by many to be a relatively environmentally friendly land use. Incorporating crawfish aquaculture with traditional agricultural practices serves as a productive form of land and water conservation. Often, land that is only marginal for traditional row crops is used for crawfish production. In addition to providing economic benefits to many rural economies and a highly valued and desirable seafood product, crawfish ponds serve as favorable wetland habitat to many species of waterfowl, wading birds, reptiles, amphibians, and furbearers. In almost every instance, when surface waters are used for crawfish production, the water leaving the ponds is of equal or better quality than when it was pumped in. Nonetheless, discharge of pond water into surrounding watersheds has been cited by some as the primary environmental concern with crawfish farming. Effluents (tail-waters) are discharged when rainfall exceeds pond storage capacity, when ponds are flushed to improve water quality, and when ponds are drained at the end of the production season. Crawfish pond effluent is usually low in nutrients and oxygen demand, but due to the activity of the crawfish themselves, turbidity and suspended solids can be high at certain times of the year. The Louisiana crawfish industry has developed best management practices (BMPs) to respond to the need to improve economic and environmental performance. Voluntary BMPs in crawfish production are an effective and practical means for conserving water, reducing energy use and pumping costs, protecting the environment, and enhancing the public’s perception of crawfish farming.

The following article can be downloaded from the North Central Regional Aquaculture Center’s website:

Potential of Crawfish Culture in the North Central Region