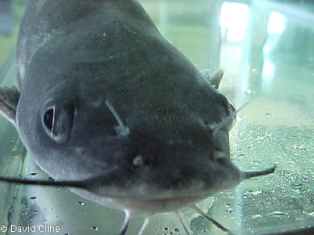 Catfish is the “king” of U.S. aquaculture in terms of pounds produced and total value. The majority of catfish production occurs in the South, in the states of Mississippi, Alabama, and Arkansas. This southern delicacy is raised in earthen ponds filled with well water and fed a floating, grain-based diet. Catfish has a mild flavor and is high in protein and low in calories. According to the National Statistics Service, 471,683,000 pounds of U.S. farm-raised catfish were processed in 2010. Farmers received an average price of $0.861 per pound. Additional catfish were processed locally or sold for pond stocking and pay lakes (fee fishing operations).

The most commonly cultured species is the channel catfish, Ictalurus punctatus, although a hybrid between the channel catfish and the blue catfish, Ictalurus furcatus, is growing in popularity. Channel catfish are a warmwater species with an optimal temperature for growth of 85°F (29°C). In the wild, catfish are omnivores, feeding on a wide variety of animal and plant materials. In culture ponds, fish are fed a complete diet, typically composed of soybean meal and other seed or grain products, with only a small amount of animal protein. 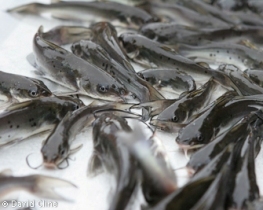 Most catfish production occurs in earthen ponds, typically 5 to 10 acres in size, with relatively small numbers produced in cages and raceways. A new production system developed at Mississippi State University, the split-pond system, has been shown to improve yields, and farmers are beginning to add these systems to their farms. Most catfish are raised in multiple-batch production. Small catfish (fingerlings) are typically stocked each spring and market-sized fish removed periodically by seining. Ponds are left for production for years without draining, as wastes are removed through natural processes within the ponds. In single-batch production, fingerling catfish are stocked and grown until almost all of the fish have reached market size, then the entire pond of fish is harvested at once, and then the pond is re-stocked. In catfish feed production, the ground feed ingredients are mixed and sent through an extruder, resulting in feed pellets that float. To feed fish, farmers use a truck or trailer-mounted hopper with a blower that shoots the feed pellets over the water surface. Thus, the fish feeding response is easily monitored to ensure that fish get fed enough but not too much. Dissolved oxygen concentrations in catfish ponds will decline over the night during the growing season, and farmers use aerators (typically electric paddlewheels) to increase oxygen levels in the water.

U.S catfish production had declined in recent years, in part due to competition from Pangasius species of catfish (all catfish are within the order Siluriformes), imported from Vietnam and sold under the names of Basa, Tra, and Swai. Some channel catfish fillets are also imported from China and Indonesia. Imported tilapia products also appear to compete with catfish in certain markets. High feed prices also increased the costs of production, especially since feed is a major operating cost. Recent increases in prices paid to farmers for catfish have made catfish culture profitable again, and farmers are increasing production to fill a shortage of U.S. farm-raised catfish.